After vigorously exploring Madeira by land for years now, we decided it’s time to explore the island from the air. We’ve seen many paragliders soaring above our heads during our many hikes, so it’s time for us to give it a try!

We contacted Hartmut Peters, a very experienced paraglider and owner of Madeira Paragliding. He provides tandem flights from his own take-off area. So, before we knew, we were putting on paragliding gear on a big grassy hill above Arco da Calheta. This being our very first paragliding experience for the both of us, it was a bit of an exciting day. No fears though, this was a happy kind of excitement. Being at the location early, we got to see a lot of other paragliders fly down with Hartmut or Emanuel Spinola (of MadAir Paragliding). And then it was our turn! 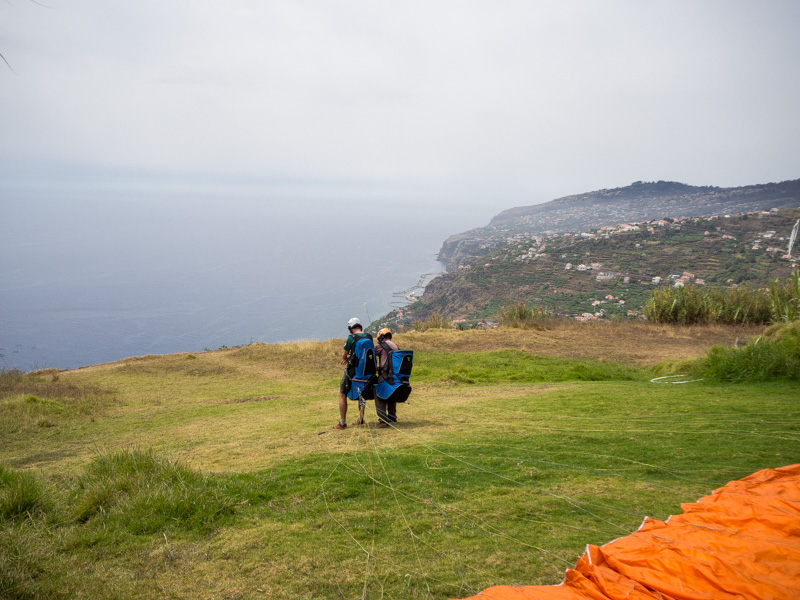 Take-off is not quite as easy as simply flying away. First of all: you have to run straight at a steep abyss and have faith that the wind will take over by the time your feet stop touching the ground. Also: the running part is pretty hard. Since in a tandem flight, the passenger is in front, you have to run and pull yourself, the pilot and the entire kite. Because the wind is blowing in the kite, this is pretty hard and you have to use all your strength to get moving. It took me three times… The first two tries, I was running as hard as I could, but not moving an inch, being pulled back by the kite. But hey, in the end, we succeeded and I was off! 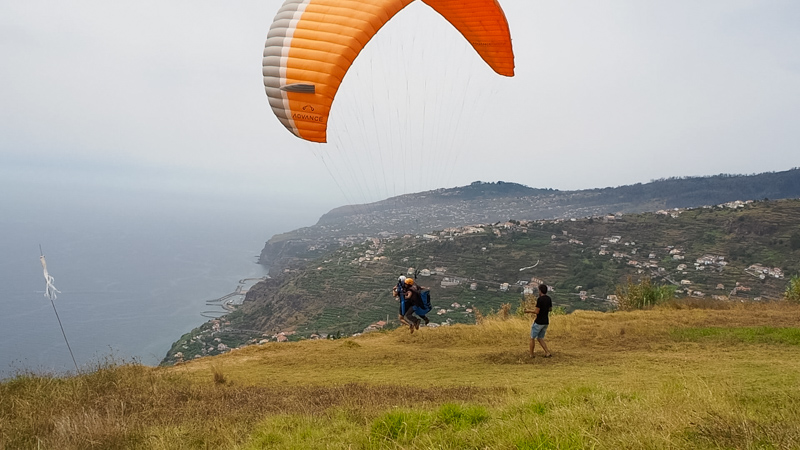 A tandem flight at Hartmut takes about 20 minutes. You start on a hill above the ocean in Arco da Calheta and you land, amidst sun bathers, on a small beach at the ocean. During the flight, you’ll have beautiful views on the Calheta area and the ocean. You’ll fly over the villages and steep cliffs and now and then you’ll closely skim the hills. A unique and beautiful experience! The only thing missing for me, was a nice view on the mountains, but Calheta just isn’t the right location for that. For a beautiful view on the ocean and cliffs though, it’s perfect!

We had a great experience flying with Madeira Paragliding. Both Hartmut and Emanuel, our pilot, are very experienced and generally nice guys. We had a good chat about the island as well. We would definitely go back. Thanks to both, for the great flight and the nice evening at the take-off area! If you’re interested in doing a tandem flight on Madeira yourself, take a look at Hartmut’s website Madeira Paragliding or on Emanuel’s Facebook page MadAir Paragliding.